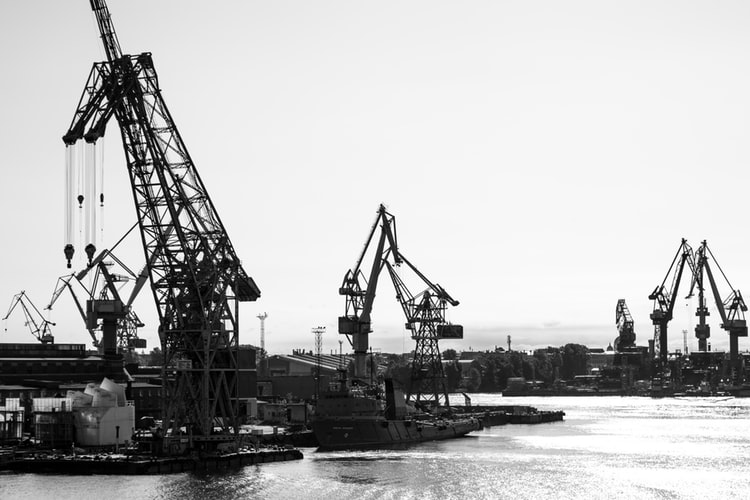 Within the shipping and supply industries thousands of cranes are used across the world daily in order to assist with the moving of goods from ships onto docks as well as trains and transporters to move them across the supply chain. The importance of cranes in these types of operations cannot be understated and in this article we will examine the different type of cranes used as well as the overall impact that they have.

One of the most notable remaining cranes that still exists to this day is located in Glasgow , Scotland and is known as the Finnieston crane. The Finnieston crane is an old crane which is located on the banks of the river clyde. It remains open to the public thanks to public support which has recognised it as a piece of history as well as Scottish heritage.

This particular crane was built as one of several cantilever cranes to be constructed around Scotland. During its active lifespan it was typically used for unloading heavy cargo from boats such as steam trains and shipping crates/containers. It had a lifting/weight capacity of at least 175 tonnes. The Finnieston crane was commissioned and in 1928 and was put into operation in 1932. Over its lifetime the crane helped to move tens of thousands of items of freight and machinery.

To this day the Finnieston crane remains in Glasgow open as a monument to a previous industrial generation. It has been preserved and is likely to be kept for future generations to learn from.

How Have Cranes Changed For Modern Society?

Cranes have changed in many different ways in order to adapt to modern society. Now in the present day cranes are considerably more advanced than they were in previous generations. Some cranes now have a weight capacity over several thousands tonnes which dwarfs previous generations of cranes.

One of the reasons why the weight capacity for some cranes has increased so much has been the sheer volume of cargo being shipped around the world. Thanks to online shopping and much more active global trade as well as new technologies there is significant demand from goods around the world. New ships and cranes have been developed in order to meet and serve this overall demand.

Cranes have been fundamental in the moving of goods at ports and docks offloading from ships onto the shore. Without this facility the entire process would be considerably slower overall.

What Changes Might There Be For Cranes Of The Future?

There are a variety of different changes that could be applicable to cranes of the future overall. One of the most significant changes could be the automation of cranes. There is currently technology being trialled which in some cases would allow for some cranes to be operated by AI.

This could lead to increased overall and efficiency and significantly increased operational hours for the crane. This technology is still in its infancy and requires testing before being used in many environments.

Overall to conclude the crane is likely to continue to be a highly valued asset in the global supply chain. New technological developments could go a long way to improving the cranes overall and making them more efficient.

The Battle of Monster Cranes

Bungee Jump From The Titan Crane This Summer